Think Tank: AI in the Workplace

Think Tank: AI in the Workplace

A discussion on the basis of artificial intelligence opened the panel while the speakers examined their own understanding of AI versus what we see in movies and entertainment. Do we fully understand it? The answer was not definite. Insights were made on how we might incorporate it into the Los Angeles community. To be more specific, AI was discussed in regards to each service sector, and how AI might affect workers and their respective industries.

Kicking it off, Ashley discussed AI’s service to Urban Development. As it is now, there are many systems in place that help Los Angeles streets and infrastructure function and support our lifestyles and daily commutes. By implementing AI we would be granted access to powerful information. With that information comes the job of turning it into actual knowledge that will be useful to companies like CityFi. For instance, if the AI is telling us where certain pot holes are around the city, that is only half the job. Someone has to then go out and fix the pot holes. AI is only half the solution; human involvement to understand and critically think is the other half. Technology does not solve or overwrite what already exists, it merely brings in new information which must be in conversation with the analog throughout generations. Additionally, we must make sure we are moving forward together and not leaving anyone behind considering the widening social gap

Geoff followed this by claiming that information is at the root of human control. When it comes to artificial intelligence, it is the possibility of not being in control that frightens us most. Being able to control and ultimately understanding that information will keep the average person and society at large at ease. For instance, people in Los Angeles are hesitant to use public transportation because they are comfortable and in control when driving their own car. Whether they are sitting in hours of traffic or not, they are steering and can depend on that time frame because they are used to taking that route. So does being in control come from knowledge or experience? Additionally, while AI, if used properly, can offer certain information and improve our quality of life, it can also have the potential to harm our need to critical think. Therefore, we must be aware of other people making decisions for our life that we disagree with or cannot argue against.

Frances recalled a discussion in which a panel of representatives for Tesla proposed the rather frightening idea of the housing industry being taken over by the idea of a ‘smart home’ – where your house collects information about you, your needs and more. The representatives concluded their discussion, noting that the cons may outweigh the pros due to the liability involved and the potential hacking activities that could occur. So we should ask ourselves, is it worth it? Is it something that will ultimately benefit us or are we just consumers that are buying things we don’t necessarily need? Technology is not always a panacea and as a community we need to decide what we want the future of our city and how AI will contribute. In the end, knowledge is power.

Clive Wilkinson spoke on AI’s infiltration of the workplace and the subsequent ‘descaling’ of the corporate structure. While large corporations still exist and always will, we are seeing numbers shrink in small to medium businesses. In LA, freelancing jobs and co-working spaces have been on the rise. In London this year, co-working spaces overtook tech corporate makeup in numbers for the first time ever. So when dealing with AI in the workplace, we are seeing ‘smart buildings’ coming into the conversation, but similar to what Frances mentioned, is there actually a market? The basic premise of a smart building is that it would interfere wherever technology currently exists, for example, adjusting airflow based on how many people are in the room, lighting when you walk in and out, and learning basic patterns of the people who work in that space and connecting with them through their smart phones. Those who would have access to smart buildings would be companies with large numbers of employees which leaves two sectors: large corporations like Google and large co-working spaces like WeWork.

We’d love to hear your thoughts ~ Share them with us on social media!

Healthcare Facility Design Trends to Lookout for in 2018

E4H Environments for Health Architecture, a firm focusing on healthcare exclusively, recently studied and released seven predictions for healthcare facility design trends in 2018. Lets take a look at what is to come. 📐 VIRTUAL REALITY 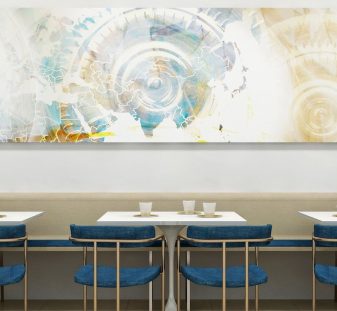 How to Specify: Acoustics for Every Industry

Having trouble finding the perfect acoustical fit for your industry’s environment? Acoustics are a major architectural function and can make or break a space if not properly addressed. We have laid out a guide to